Our team seeks to expose the traveler to the avian treasures of this State that is rich in cultural, historical, biological and geological heritage. Illustrated below, are the snapshots of the profiles of our guides on eBird.org for Goa. Our guides are amongst the top 4 eBirders in the State with enviable credentials and therefore we can confidently assure you that you are birding with the best! 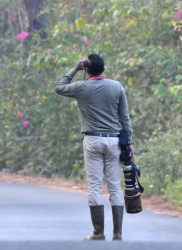 SAVIO FONSECA
Savio, 52, has been birding since 2010. Along with India’s leading ornithologist Bikram Grewal, he has authored the “Photographic Guide to the Bird’s of Goa” which is the leading authority on the Birds found in Goa. Savio also works with the Goa Tourism Development Corporation, the nodal body for the State’s Tourism Administration to develop avian tourism to the State through a series of initiatives. Savio is also a nominated member of the Committee for preparing the Goa State Biodiversity Action Plan besides being on the Biodiversity Management Committee for Village Panchayat of Socorro.

AIDAN FONSECA
Aidan, 22, has been birding since he was 11. When he was 14, he was among the 16 selected from around the world by the Cornell Lab of Ornithology as the Young Birder of 2014. His dream is to be a biologist specialising in ornithology. He has completed his graduation in Zoology and is currently an intern with the Goa State Biodiversity Board and does projects with the Goa State Wetland Board.