Rescue | Oriental Dwarf Kingfisher | October 2018 It was around 7AM on 25th October 2018, when a birder friend came across this tiny bundle of colors, feathers and energy being handled by a security guard who had just saved it from stray dogs and crows after it had crashed, possibly into a window, at the District Hospital at Mapusa. Her surprise, rapidly turned into anguish since the bird appeared to be stunned and disoriented. The most distressing observation was a horizontal head movement that started from the front (12 o’clock position) and slowly moved to the right hand side until the 5 o’clock position until it stopped, snapped instantly back to the 12 o’clock position and repeated the process endlessly indicating a neurological trauma. This oscillation was similar to a battery-operated toy with a defective mechanism. We had come across similar 5 situations in the last 3 years which unfortunately have ended in the deaths of the birds. Unfortunately, the veterinary and avian pharmacology support in India is non-existent leading us to improvise on the treatment and pharmacology. We were then able to successfully treat the bird in 48 hours leading to its eventual release in a habitat consistent with its species!

PS: The individual is featured on our above banner 🙂 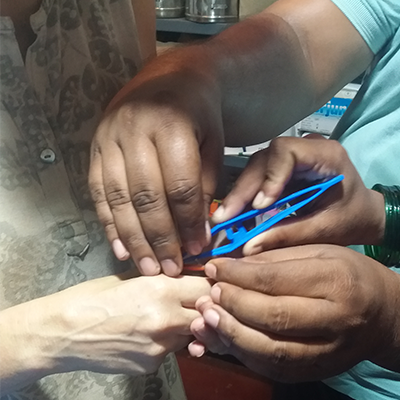 It was in July 2017, that a vicious storm struck Goa and the lifeguards on duty at the beach came across a distressed Red-billed Tropicbird. Red-billed Tropicbirds’ are so rare in the Arabian Sea that frequent pelagic trips have not been able to record many sightings. Further, not much was known about the bird including its food habits. The bird had not encountered humans in its lifetime and as such, was not afraid to be approached by humans. The bird also was not used to moving on land, and used its wings to push itself forward. It was found to be a juvenile, severely under nourished and estimated to have spent at least 10 days in choppy seas. Much of its primary feathers were lost and needed to grow back. An estimate in winds, time and distance put its point of origin on an atoll on Lakshadweep Islands where they are known to have breeding colonies. We quickly learnt that its diet included squids and deboned fillets of fish and its daily intake was about 150% of its body weight! It took the entire village to raise it (with boats for rescue during aborted flight practice and fish supplies) till its successful release in 2 weeks! 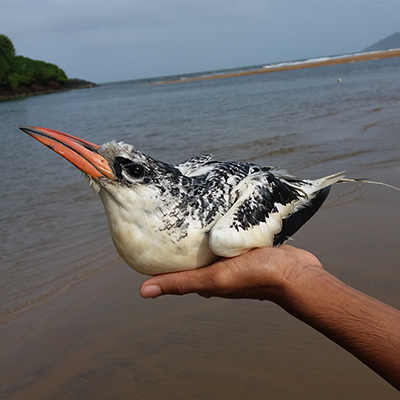 “In my repeated forays into the environs of Carambolim, I encountered Vithu. Vithu asked me what I was unto. I told him that I am looking for an owl, which I described and to my surprise, he replied that he has seen them around. He was true to his word on my next visit and showed them to me, and their photographs now feature in my book.

Vithu, now earns money from those who want to see or photograph the owls. Once, his tiny village had hosted a wedding. Yet, Vithu could think only of his owls and protested the use of firecrackers. I visited him some days later and he proudly showed off the bruises he received due to the beating he received for opposing the crackers.

Vithu, today forms the core of my Bird Tourism policy, which I have recommended to Goa Government’s tourism administration. This is the answer to the question of sustainable tourism that Goa has been looking for in the last 4 decades of unbridled and devastating tourism the tiny state has witnessed. Tourism, when the local communities take ownership of the tourism assets for their own sustenance and preservation through respect, preservation and welfare of such assets! “– Savio Fonseca 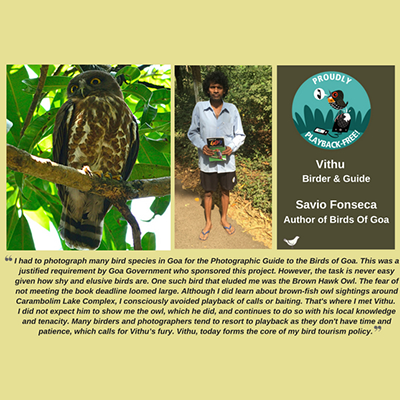 In our endeavor to introduce birding and bird biology to budding young minds, we conducted Birdwatching Camps in association with the Don Bosco Oratory, Panjim. The objective was to introduce the children aged 7 till 12 years to birds, their biology and behavior. The usefulness of this course served a number of possibilities including career in ecology, performance in conventional school learning and development of hobbies.

During their field trips, the children were exposed to various bird species, their habitats and logging their sightings on eBird. The course was further refreshed after a 6 months break and their birding skills has evolved to easy identification of at least 100 bird species which is an incredible achievement for children aged around 9! Further changes observed in these children was an increased perception of their environment including observation and change in attitudes towards caging of wild animals including birds. Also their parents have been more supportive of their hobbies and we keep looking to engage more children in our evangelical mission to bring people to a closer understanding of nature around them! It is a difficult task but small baby steps like these encourage us to do more to save the planet! 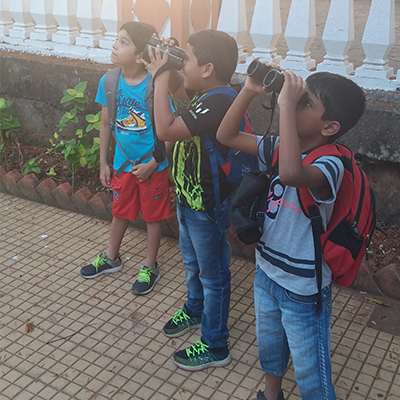 Much of our non-birding time is spent towards curating a local bird community group on Facebook called Birds of Goa that is an active meeting ground for about 17000 members. This group has been active for around 6 years and has been a depository of daily experiences and photographs of mostly local and visiting birders.  Visiting birders find it useful to do a brief check on the birdlife in the State and prepare themselves for their visit. This group has a synergetic relationship to our existence and keeps us abreast of bird movements within the State. We also have set up a sister group called Wildlife of Goa that covers all biodiversity components in the State with the exceptions of birds. This group is useful in widening our horizons of understanding of living creatures around us. The groups are also used to educate the members on conservation, climate change and issues confronting the planet today. Occasionally, the group serves as a platform to help birds / animals in distress or in need of rescue. We have been successful on the evangelizing front in acquiring new members and introducing  them to the world of birding and appreciation of the biodiversity around us.